ACT was established with the objective to reach Net Zero carbon for AITO members, and the main focus will naturally be on how this can be achieved within Travel. To achieve Net zero as a society however will mean actions from governments, industry, and us – the individual. Clive Stacey has produced an excellent paper considering the macro level, and potential solutions, and as Chair of AITO, I wholeheartedly agree with, and support his paper, however I’d like to give my experience at a micro level – what I’m endeavouring to do as an individual to help literally put my house in order.

I started this article a month ago as workmen were putting solar panels on my garage, unfortunately other issues arose, and I’ve not been able to come back to this until now – but I do now have a month of generating my own electricity (360Kwh to date).

So what I hear you say, solar is not new – but I live in a 300 year old grade 2 Listed Property – with a thatched roof, so trying to work out how to get my house to as close to net zero as possible is not straightforward – but (like charity) I believe that these things should start at home. This is even more so when about 1/3 of our CO2 output comes from our buildings, we have to take this seriously & do something about it. Without this achieving overall net zero will not happen.

Being a listed build we have many restrictions about changes we can make, ensuring that we preserve the character & historic value of the building – something I’m absolutely in favour of. 300 years ago though, the concept of insulation and energy efficiency was not a thing. Any changes meant that we have to get not only planning permission, but also historic building consent.

So how to make a building like this close to zero carbon?

First, as I’ve said is solar PV. Not on the thatch, but fortunately the garage building is quite new, practical for installation & permission was given. Unfortunately the space did not allow as large an array as I hoped but at least I know that this will produce some carbon zero electricity.

Next is an Air Source Heat Pump (ASHP), to be installed in September. Many people say heat pumps only work in new highly insulated houses. I beg to differ. In my last house (also grade 2 thatch of similar age) 10 years ago I installed a ground source heat pump, removing an oil boiler. Not only did it work, but it halved my heating costs, and the grants I received over 7 years paid for most of the installation. This time, I don’t expect to get similar returns, but it will remove the CO2 produced by my gas boiler by using some of my own electricity and a true renewable supplier to power it.

ASHP’s have to work with the building, and perhaps do take a little getting used to. They provide constant low level heat, so whilst it is difficult to think ‘I feel a bit chilly’ and whack the thermostat up, the heating will be on all the time during the cold months, ensuring the building never really cools down. This constant trickle heat I believe is much better for an old building than the very hot / cold that is delivered from a gas boiler at 70 deg C.

To make it work however I have to eliminate as much heat loss as possible- and this is the real challenge with an old building. Being listed I cannot change to double glazing & PVC. What I’m doing is installing very simple acrylic internal secondary glazing, and enclosing the porches to create better heat loss barriers when external doors are opened. Thatch is a good insulator – but I’ve also added thick loft insulation throughout. I’ve been tracking down any drafts throughout the house & plugging gaps where possible, and for the open fire I found something called a Chimney Sheep – a formed piece of Herdwick Sheep felt which blocks the chimney when not in use. Simple but very effective. 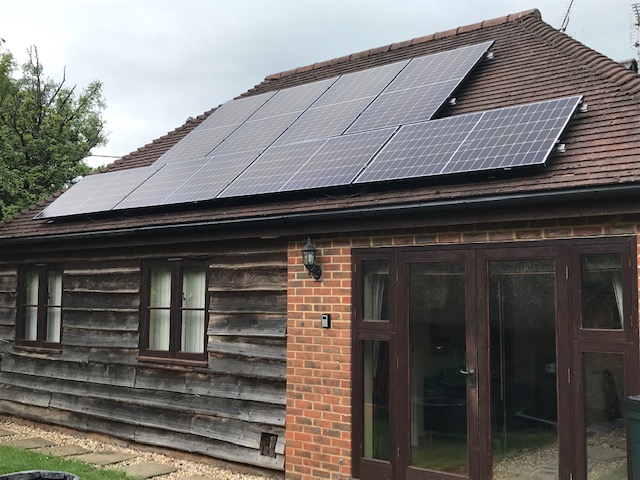 LED bulbs are marvellous. The quality of the light is excellent – but by changing halogen spots in the kitchen to LED’s energy consumption went from 360w to about 50w, and this has been continued throughout the house, so not only has my current energy use dropped dramatically but my electricity cost now averages about £1.10 a day. Time will tell what the impact of the solar panels & the ASHP will have on this consumption – over the first (Summer) month I’ve generated 360 Kwh, I believe that over a year I will produce enough electricity for everything but the heat pump.

And so to the cost, as I hear so much about not being able to afford to become green. Light bulbs insulating secondary glazing etc will be about £2,500, the solar £4,000 (this would be less with a more conventional building) ASHP £12,000 (but I’ll receive about £9,000 in grants) so net cost about £10,000 – with ongoing energy savings & selling excess electricity I believe I’ll recoup the cost within 10 years, and from then on will enjoy much lower running costs – and have a more cosy house to live in. Right now, with interest rated being so low, it seems a good investment even if borrowed.

But my key driver was not really about money. It was about carbon. My first though was ‘Electric Car’. But the minimum cost of this was likely to be £35,000 – and the carbon savings from fuel (even using green electricity) are probably 2.5 tonnes per annum, and I’m concerned about the additional carbon produced making batteries. I’d rather not be burning fossil fuel, but my current car although over 10 years old is reliable and can keep me going for a few years yet.

My house currently emits around 3.7 tonnes per annum. I’ll generate some of my own electricity, with more being bought from the same green supplier as my hypothetical car above, so carbon wise, I’m removing 50% more carbon, at (nett) less than 1/3 of the cost of the electric car.

As I said at the beginning I believe that carbon reduction, like charity starts at home. Within travel, we have much to do, and often I think that we can be paralysed not knowing where to start. I hope that sharing what I’m doing at home may enable others to this may give some inspiration to help other people to make a significant start to this journey.

P.S. To be clear, I’ve not had a carbon audit done of my house (although I’ve done my own research), or any other part of my lifestyle. This – and the electric car – will come someday, but some things are so obvious that it is better to get on with it, and get it done, and do the accurate calculations later.

The findings of a landmark report from the World Tourism Organization (UNWTO) and the International Transport Forum (ITF).

A Traveller’s Realistic Approach to Climate Crisis
May 5th 2021 Clive Stacey, Discover The World
Learn more
Tourism’s Carbon Emissions Measured
The findings of a landmark report from the World Tourism Organization (UNWTO) and the International Transport Forum (ITF).
Learn more
We use cookies on our website to give you the most relevant experience by remembering your preferences and repeat visits. By clicking “Accept”, you consent to the use of ALL the cookies.
Cookie settingsACCEPT
Manage consent

This website uses cookies to improve your experience while you navigate through the website. Out of these, the cookies that are categorized as necessary are stored on your browser as they are essential for the working of basic functionalities of the website. We also use third-party cookies that help us analyze and understand how you use this website. These cookies will be stored in your browser only with your consent. You also have the option to opt-out of these cookies. But opting out of some of these cookies may affect your browsing experience.
Necessary Always Enabled
Necessary cookies are absolutely essential for the website to function properly. This category only includes cookies that ensures basic functionalities and security features of the website. These cookies do not store any personal information.
Functional
Functional cookies help to perform certain functionalities like sharing the content of the website on social media platforms, collect feedbacks, and other third-party features.
Performance
Performance cookies are used to understand and analyze the key performance indexes of the website which helps in delivering a better user experience for the visitors.
Analytics
Analytical cookies are used to understand how visitors interact with the website. These cookies help provide information on metrics the number of visitors, bounce rate, traffic source, etc.
Advertisement
Advertisement cookies are used to provide visitors with relevant ads and marketing campaigns. These cookies track visitors across websites and collect information to provide customized ads.
Others
Other uncategorized cookies are those that are being analyzed and have not been classified into a category as yet.
SAVE & ACCEPT